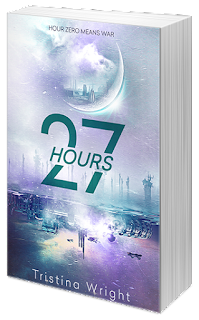 Welcome to my stop on the 27 hours blog tour! Below you will find information about 27 hours, my review and an awesome giveaway at the end of this post! Be sure to follow the tour here :
http://www.chapter-by-chapter.com/tour-schedule-27-hours-by-tristina-wright/

Rumor Mora fears two things: hellhounds too strong for him to kill, and failure. Jude Welton has two dreams: for humans to stop killing monsters, and for his strange abilities to vanish.

Nyx Llorca keeps two secrets: the moon speaks to her, and she’s in love with Dahlia, her best friend. Braeden Tennant wants two things: to get out from his mother's shadow, and to unlearn Epsilon's darkest secret.

They’ll both have to commit treason to find the truth.

During one twenty-seven-hour night, if they can’t stop the war between the colonies and the monsters from becoming a war of extinction, the things they wish for will never come true, and the things they fear will be all that’s left.

27 Hours is a sweeping, thrilling story featuring a stellar cast of queer teenagers battling to save their homes and possibly every human on Sahara as the clock ticks down to zero.

My Review
I don't normally read a lot of sci-fi but I'm so glad that I took a chance and read 27 hours! I loved the fact that all the characters are queer. I know that representation is important and that everyone deserves to have that representation.  Not only that but the characters are wonderfully written. I enjoyed the world building as well. There is also plenty of action and just the right amount of romance. I can't wait for the second book!
AUTHOR INFO: 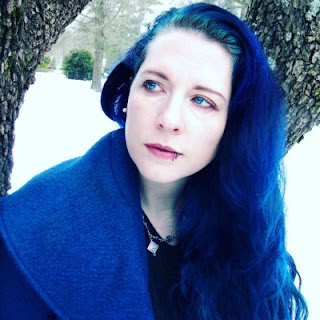 Tristina Wright is a blue-haired bisexual with anxiety and opinions. She’s also possibly a mermaid, but no one can get confirmation. She fell in love with science fiction and fantasy at a young age and frequently got caught writing in class instead of paying attention. She enjoys worlds with monsters and kissing and monsters kissing. She married a nerd who can build computers and make the sun shine with his smile. Most days, she can be found drinking coffee from her favorite chipped mug and making up more stories for her wombfruit, who keep life exciting and unpredictable.

A 27 Hours Prize Pack, including:
* A 27 Hours Candle
* A set of 27 Hours Character Cards
* AND a copy of an October release *
*Open internationally wherever The Book Depository ships

April 14, 2017
Dating the It Guy by Krysten Lindsay Hager Publication date: March 21st 2017 Genres: Contemporary, Romance,  Young Adult Synopsis: Emme is a sophomore in high school who starts dating, Brendon Agretti, the popular senior who happens to be a senator’s son and well-known for his good looks. Emme feels out of her comfort zone in Brendon’s world and it doesn’t help that his picture perfect ex, Lauren, seems determined to get back into his life, along with every other girl who wants to be the future Mrs. Agretti. Emme is already conflicted due to the fact her last boyfriend cheated on her and her whole world is off kilter with her family issues. Life suddenly seems easier keeping Brendon away and relying on her crystals and horoscopes to guide her. Emme soon starts to realize she needs to focus less on the stars and more on her senses. Can Emme get over her insecurities and make her relationship work? Life sure is complicated when you’re dating the it guy.
4 comments
Read more