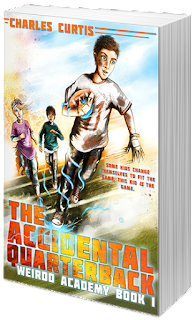 Alexander Graham Ptuiac, the son of an inventor, dreams of playing football. But his dreams are thwarted by his lack of athleticism and overall lanky build. Like any kid with a dream, Alex tries out anyway, just in case. If nothing else, maybe he can win the role of water boy. So when Alex suddenly manifests superhuman powers during football tryouts, Alex can’t believe his good luck. He’s got game! But his new abilities can get him kicked off the team; unless Alex can keep it a secret long enough to find out how the heck he got this way. Enter Dex, a diminutive classmate who can somehow jump as high as ten feet in the air. Now, Alex isn’t the only one at school with a secret. Except, the boys have caught the attention of some pretty nefarious adults, intent on making sure neither Alex nor Dex make it through the season.The only thing stranger than Alexander Graham Ptuiac, accidental quarterback, is the shocking truth about himself and his parents. When truth is stranger than fiction and adults are out to get you, there’s only one thing to do. Play ball! 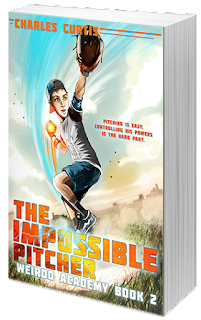 Alex and Dex are local heroes. Suddenly, everyone wants to be friends with Alex, Dex and Sophi.

But someone more powerful than any of them lurks in the background, keeping a close watch until it’s time to swoop in and capture them. Still, Alex tries to maintain some semblance of normalcy — in the offseason, he wants to play baseball. As Alex becomes a formidable pitcher, his powers grow and so does his obsession with controlling them.

With Alex finding less and less time for Dex and Sophi, Dex discovers his cat-like abilities start to disappear soon after he starts spending time with a girl.

As the friends struggle to maintain their friendships, that mysterious someone gets closer and closer. Can the three friends find their way back to one another before it’s too late? Or will middle school tear them apart for good? 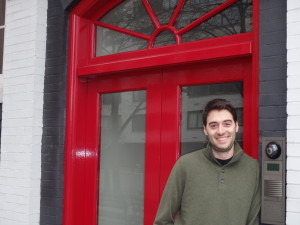 Charles Curtis a sportswriter for USA Today’s For The Win. He has reported and written for other publications including ESPN The Magazine, ESPN.com, Bleacher Report, NJ.com, TV Guide and Entertainment Weekly. He lives in New York City with his wife and son.

April 14, 2017
Dating the It Guy by Krysten Lindsay Hager Publication date: March 21st 2017 Genres: Contemporary, Romance,  Young Adult Synopsis: Emme is a sophomore in high school who starts dating, Brendon Agretti, the popular senior who happens to be a senator’s son and well-known for his good looks. Emme feels out of her comfort zone in Brendon’s world and it doesn’t help that his picture perfect ex, Lauren, seems determined to get back into his life, along with every other girl who wants to be the future Mrs. Agretti. Emme is already conflicted due to the fact her last boyfriend cheated on her and her whole world is off kilter with her family issues. Life suddenly seems easier keeping Brendon away and relying on her crystals and horoscopes to guide her. Emme soon starts to realize she needs to focus less on the stars and more on her senses. Can Emme get over her insecurities and make her relationship work? Life sure is complicated when you’re dating the it guy.
183 comments
Read more